I've been dyeing a lot of flanel lately for one of my projects for the Art Academy. From a leftover piece I made myself a phonecase. On the front I sewed a copy on bookbinding linen from an old collage. 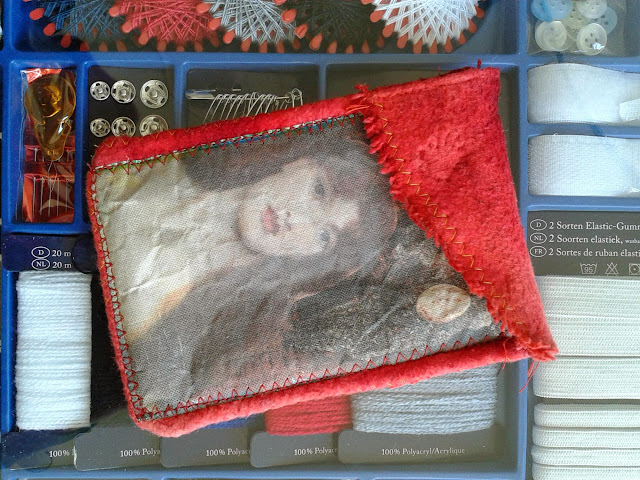 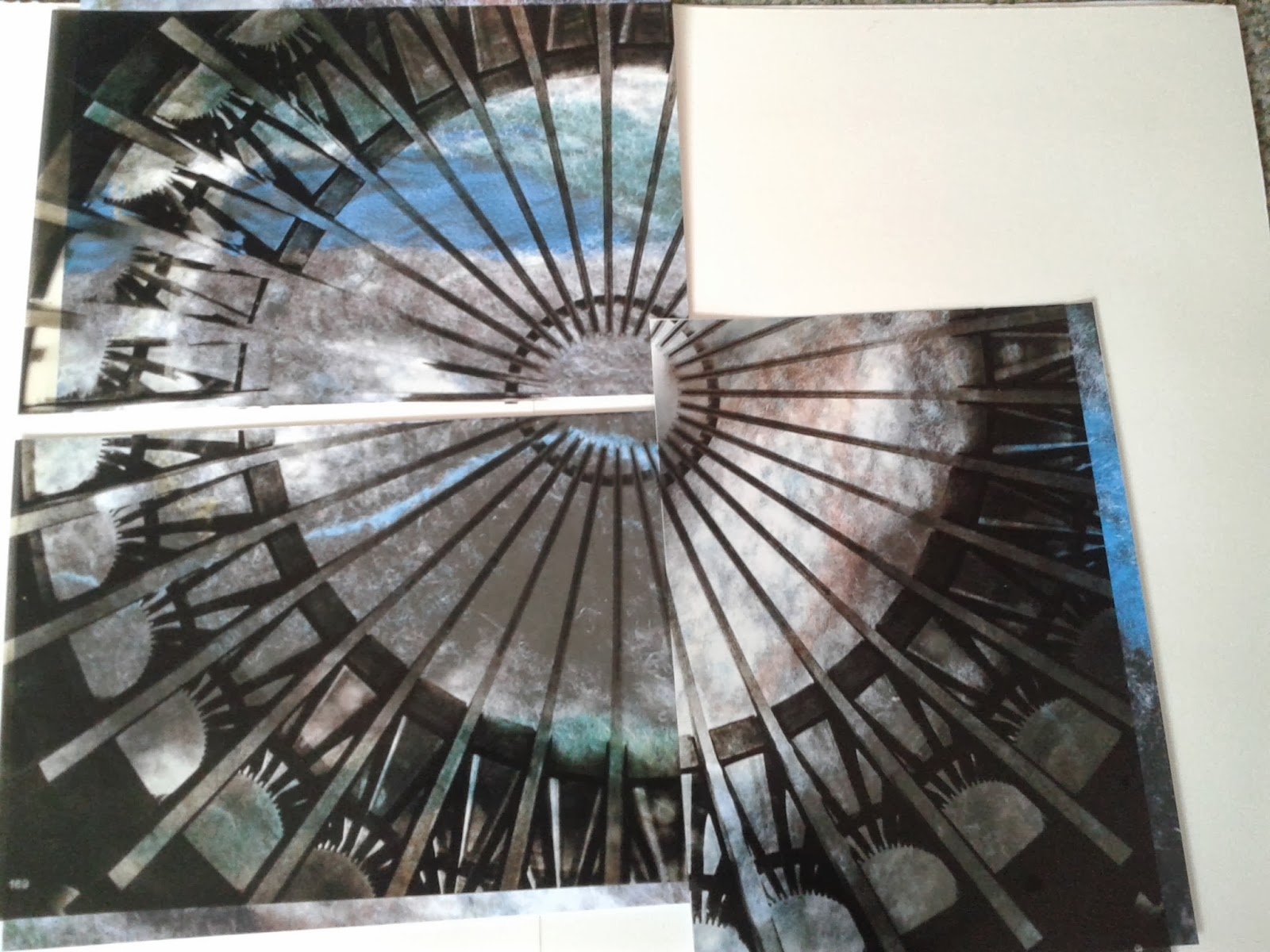 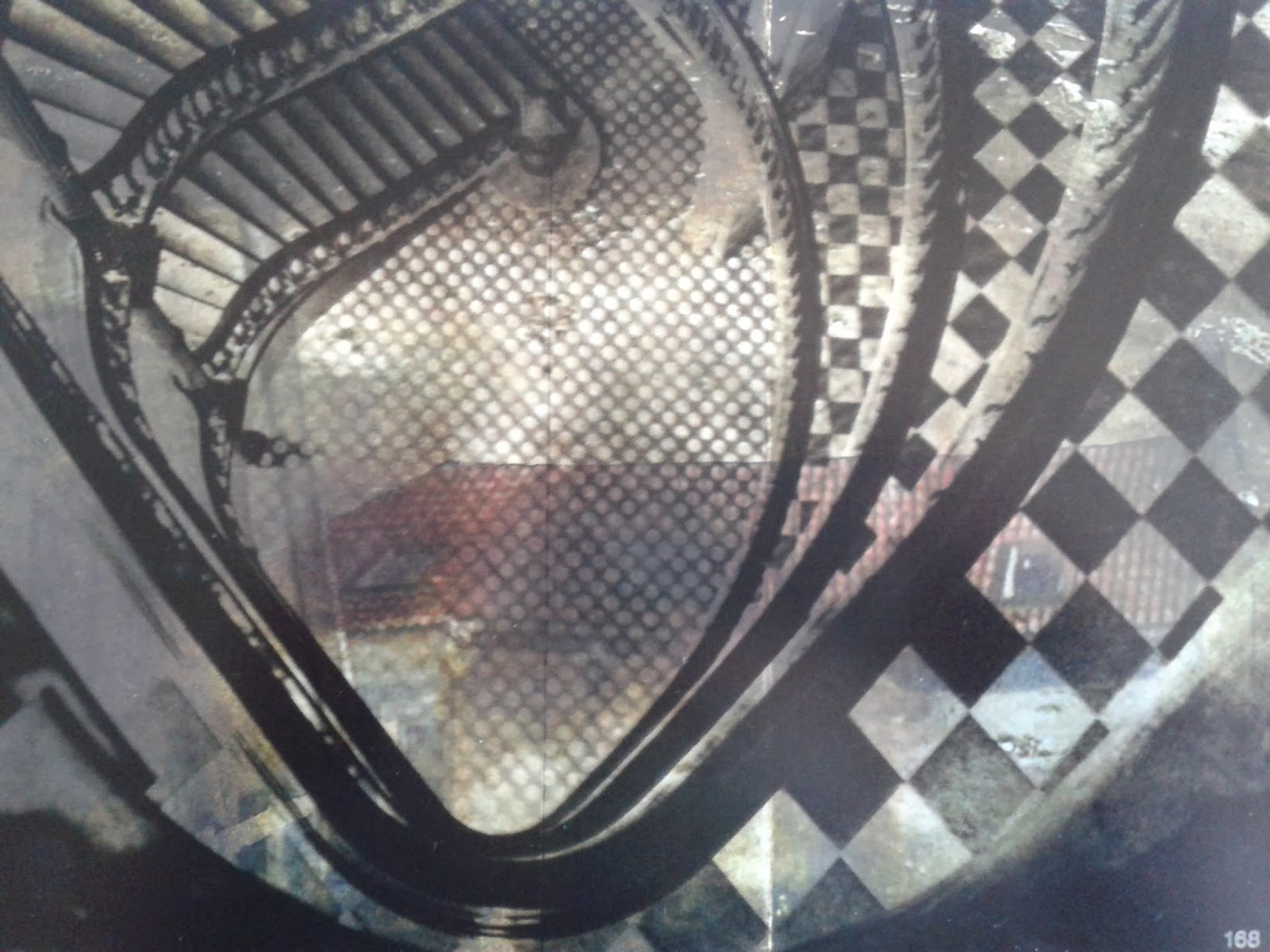 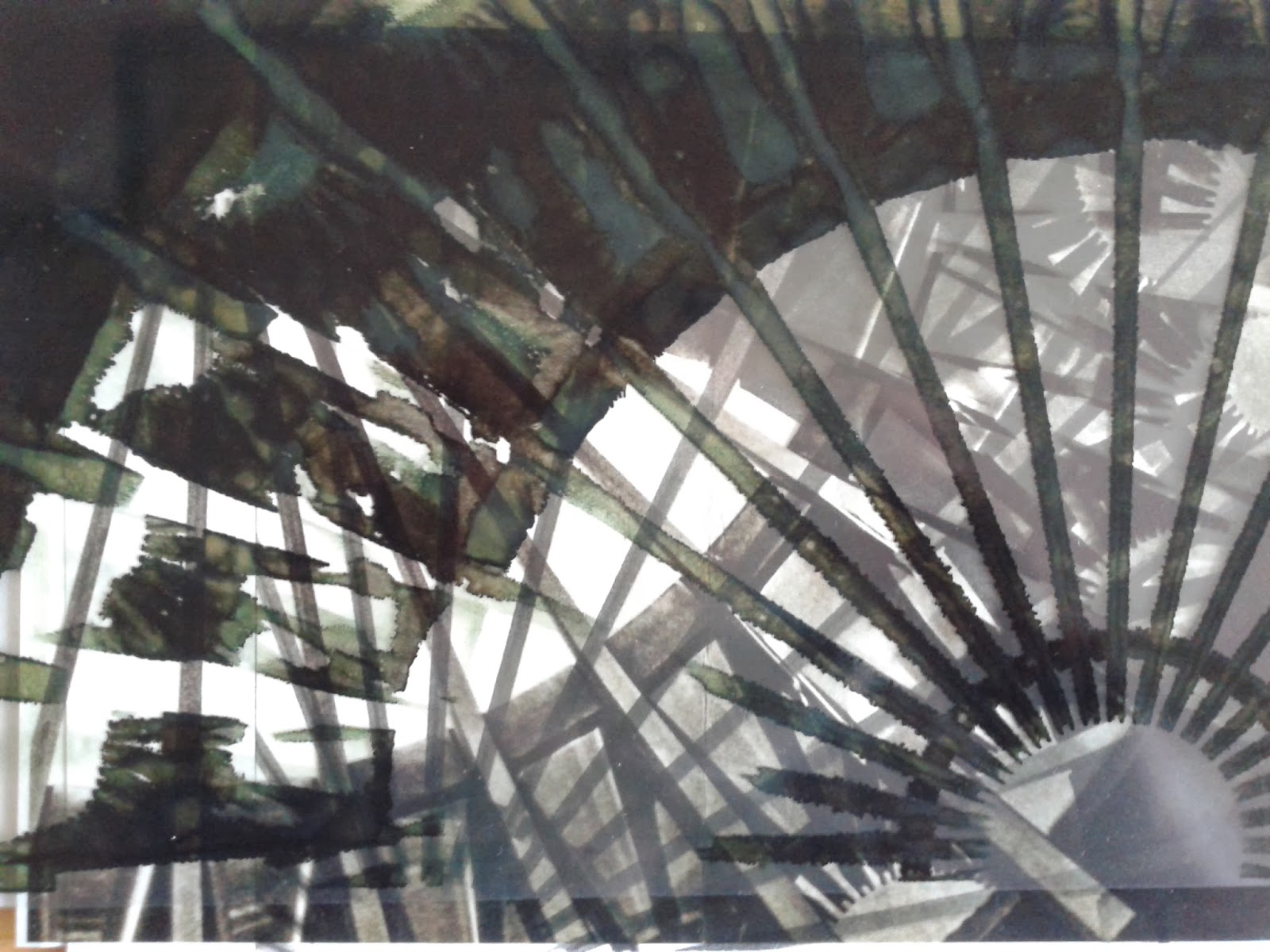 The photos above are details from the first three works I put in for evaluation in January. I wrestled enormously with the assignment for this first evaluation.The objective was perspective and 3D in 2D. It was a bit vague to me, I didn't know what to do for a long time and tried different things. In December at last  I came up with these works. I made several copies from my own photos from a felt scarf and copies from a 1960's book about Canada. I liked these photos because of the typical dated colours.
I also copied on clear sheets and placed them over each other in a pattern I thought interesting. Then I glued them on foam board.
One time I copied on the wrong kind of sheet and it came out the machine as if it was a watercolour. It took ages to dry but I liked the effect very much. You see a detail in the third photo.
My idea was that what you saw on first sight wasn't really what it was.


Here you see the works hanging on the wall in the building of the art academy.
The judges thought them interesting but had liked to see more works, a greater variety  and more of the road I had travelled to get to this end result.
They gave me a score of 6,5. OK, I could live with that judgement. I was happy that I had come up with works I myself liked, although it were only three. 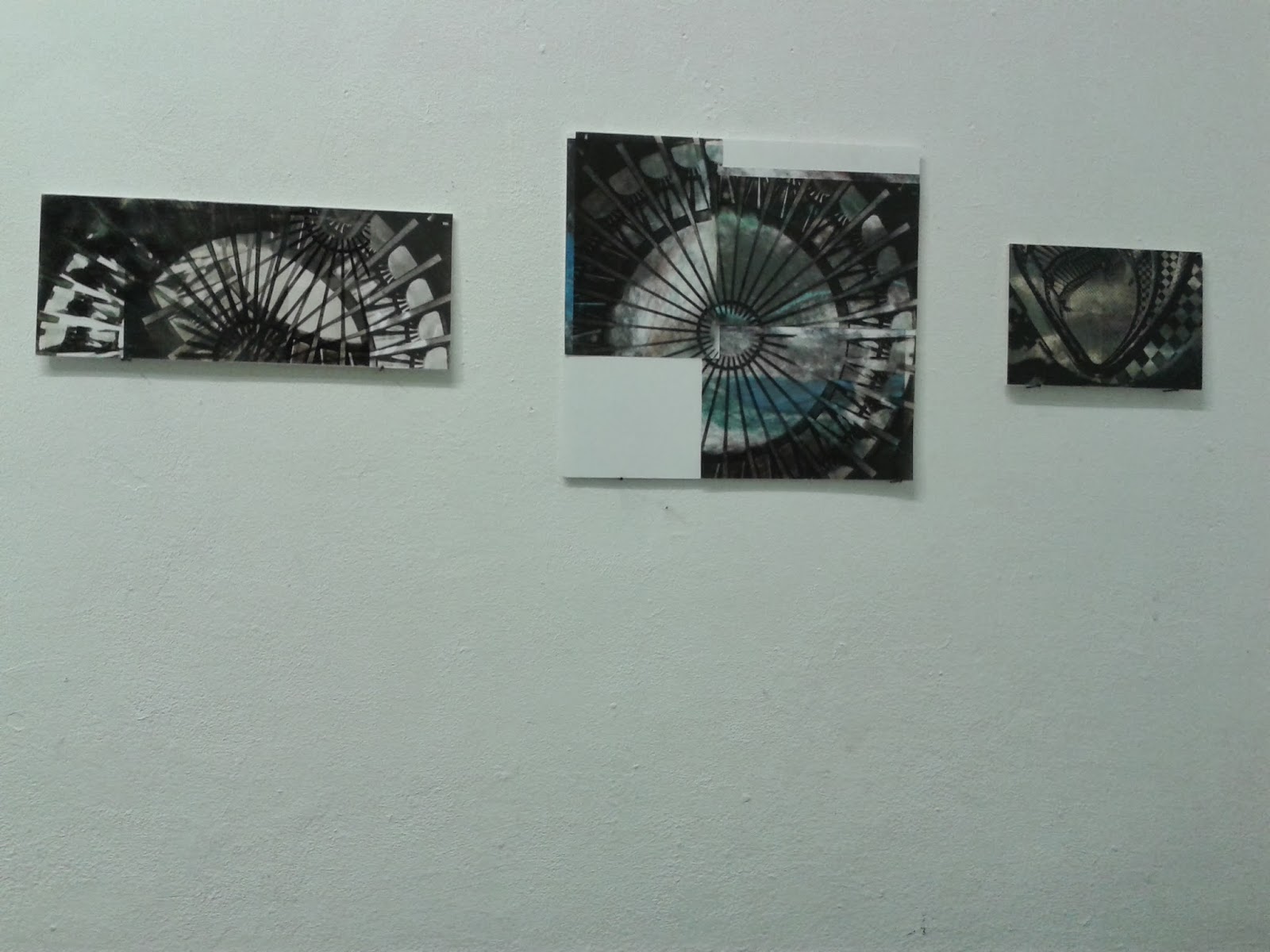 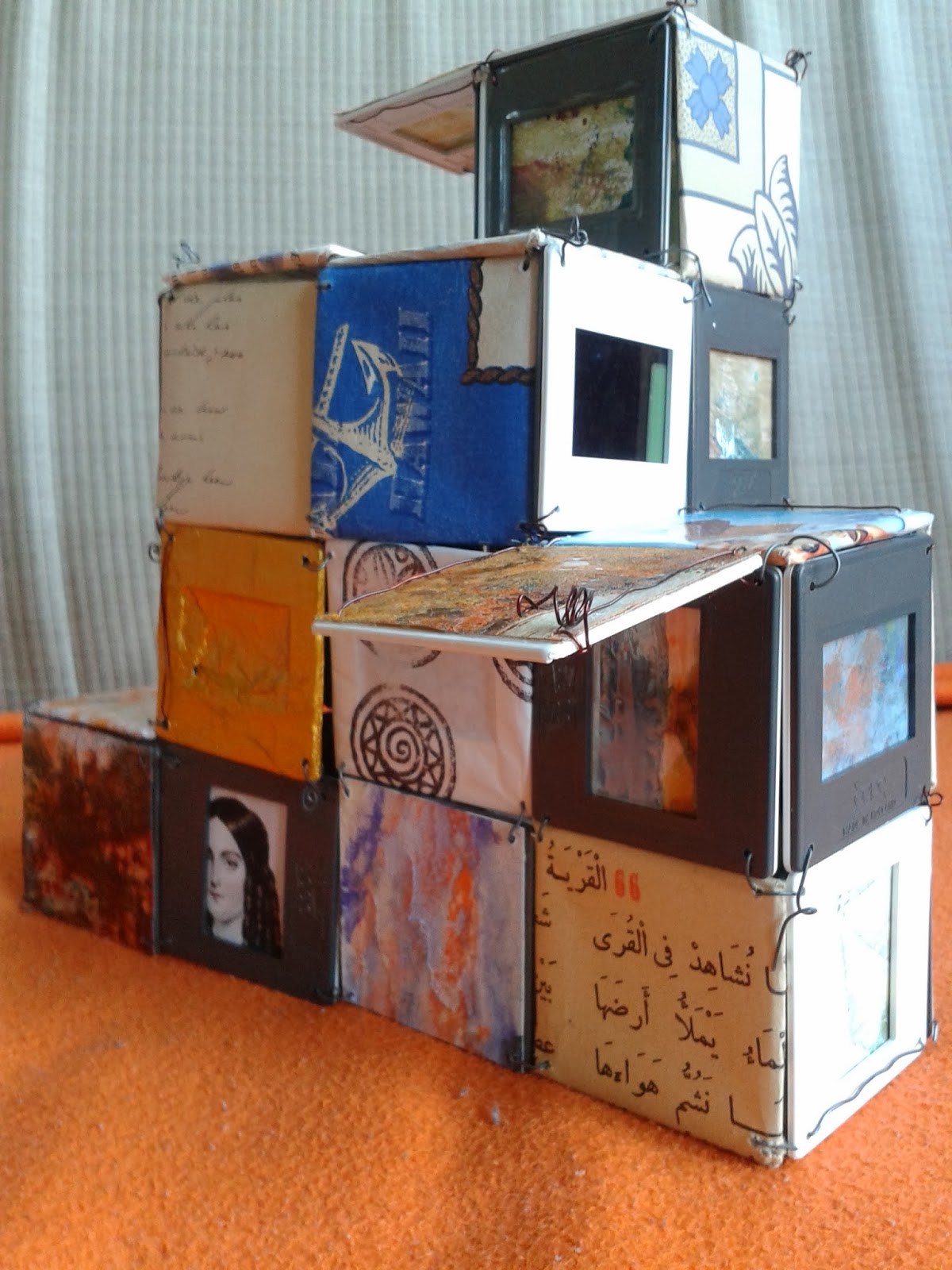 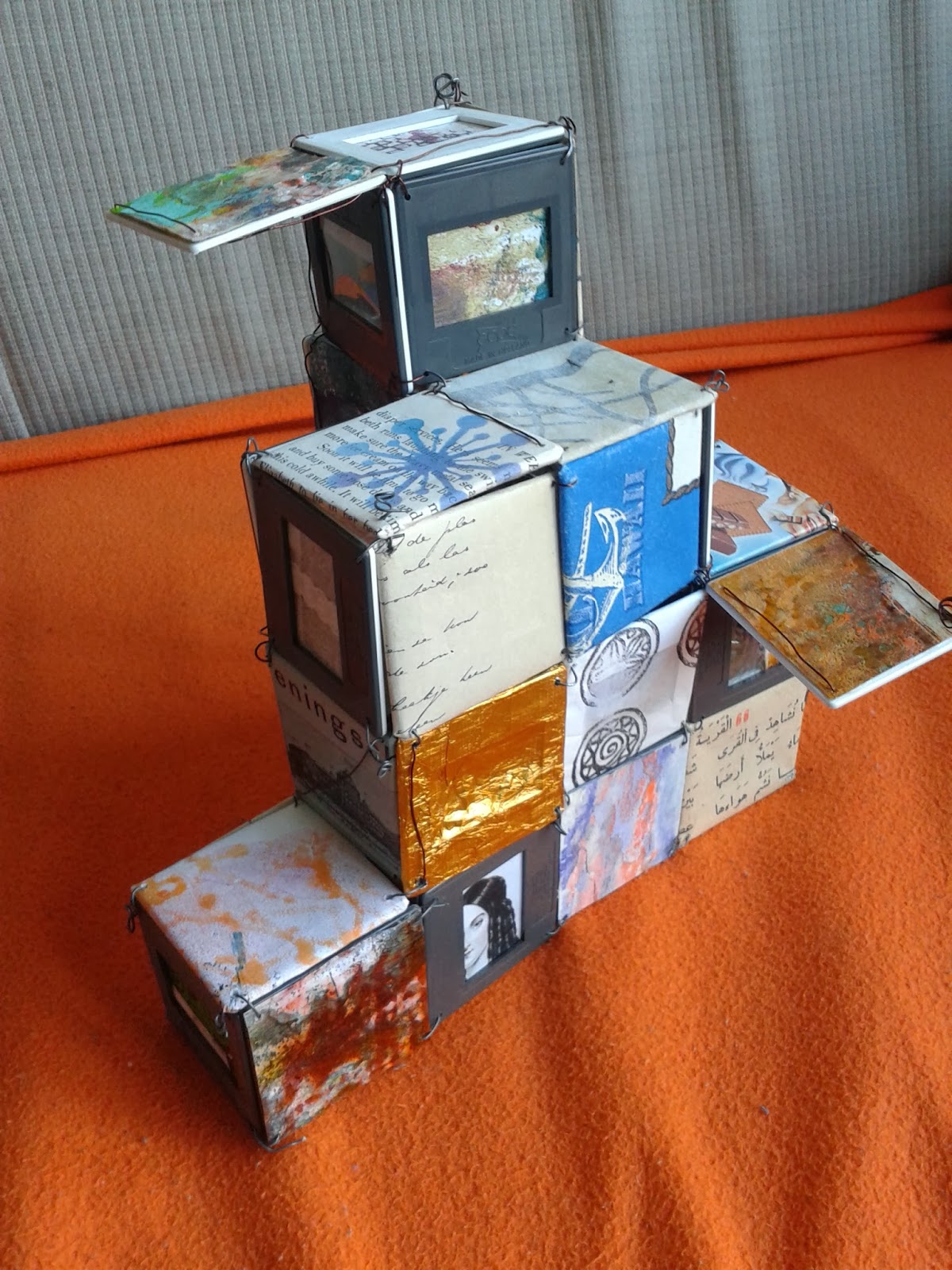 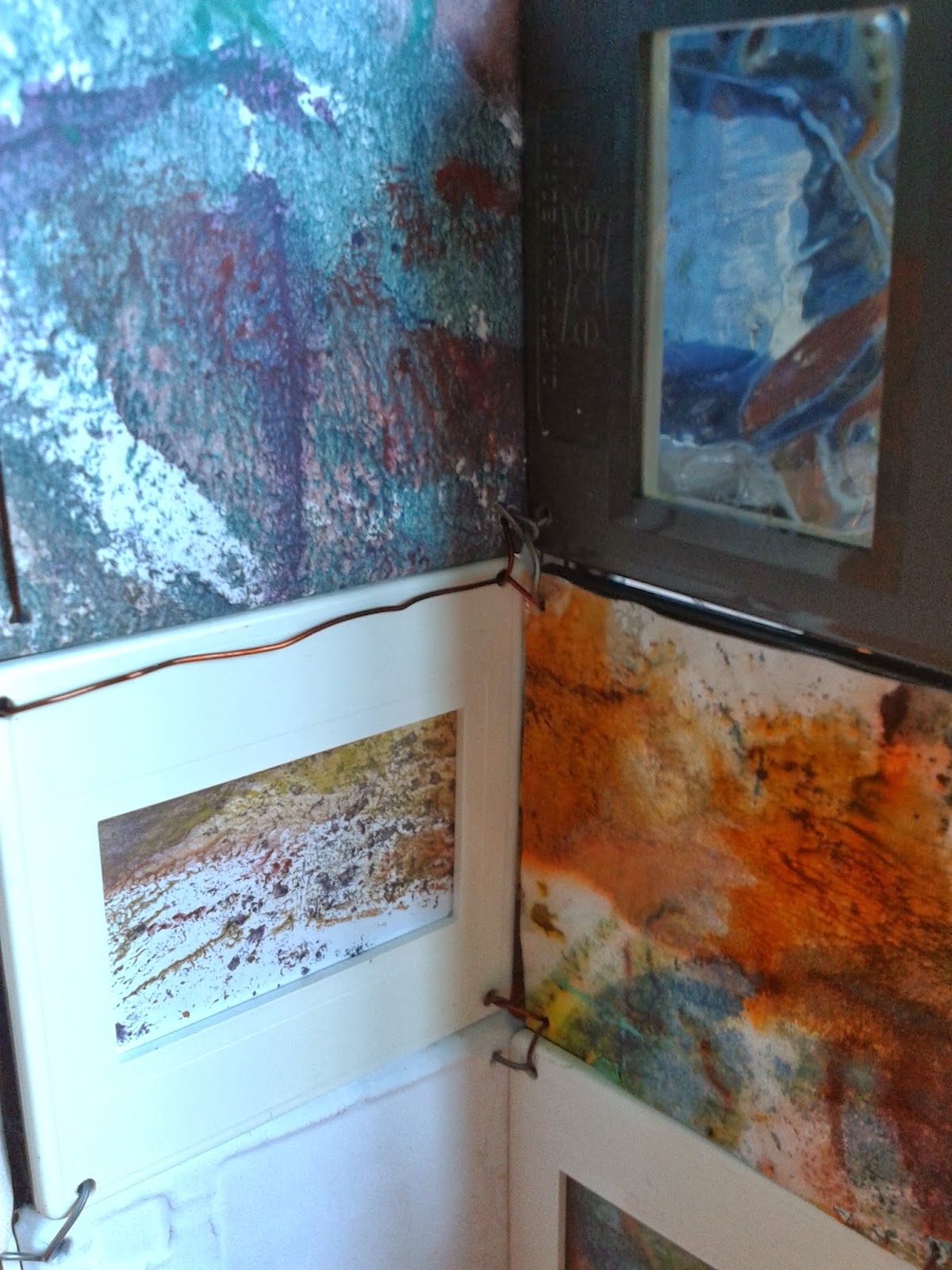 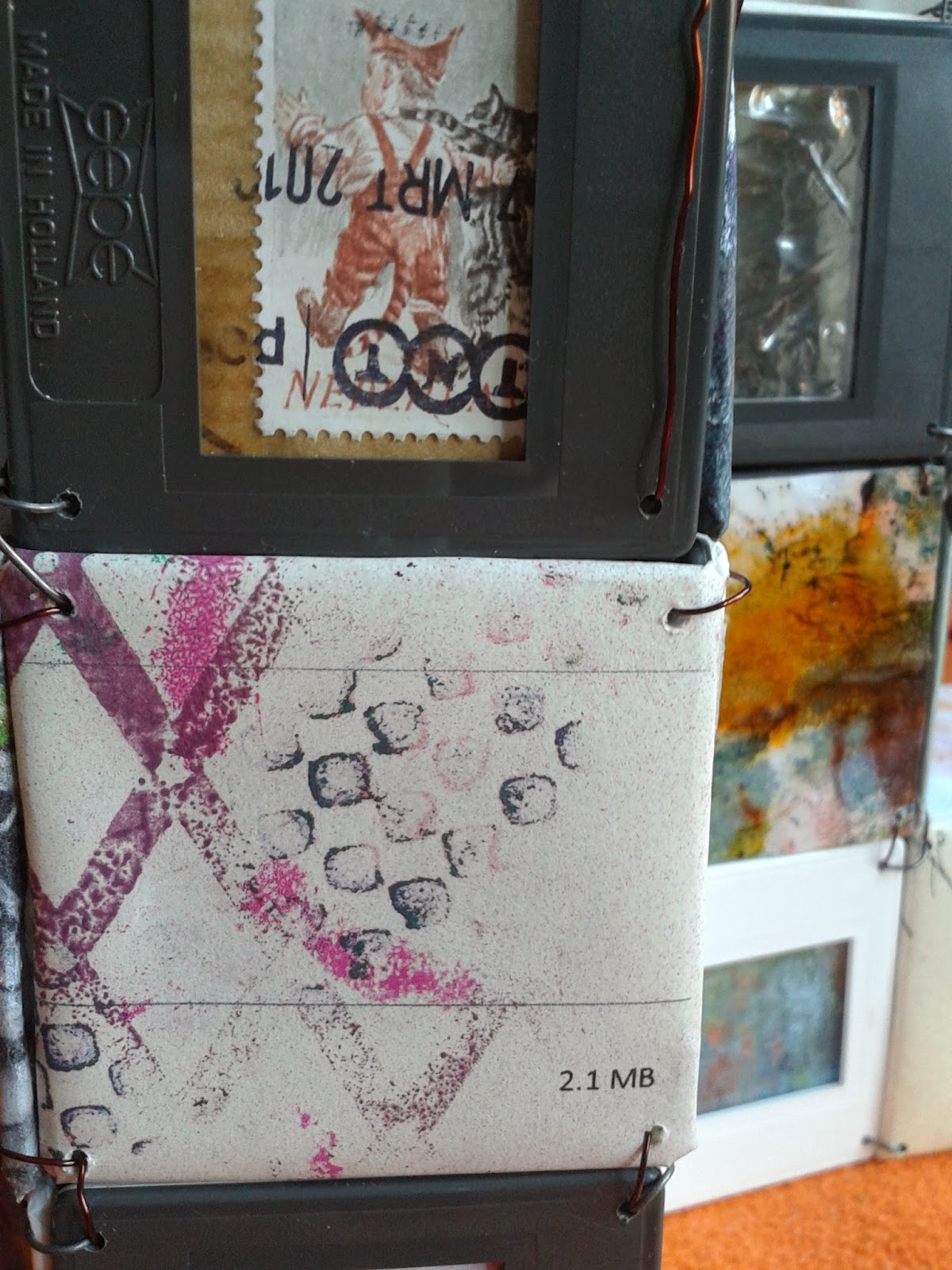 After my experiments with plaster I turned to paper again. It's my most favourite material after all. I covered old slides with an assortment of scraps of paper and sometimes just stuck a piece on one side. Because in the slums all kinds of materials are being used I used the pieces of paper without putting much thought in colour coordinating.
I drilled holes in the corners and joined the slides with iron and copper wire. Sometimes I made a small embellishment with the wire. 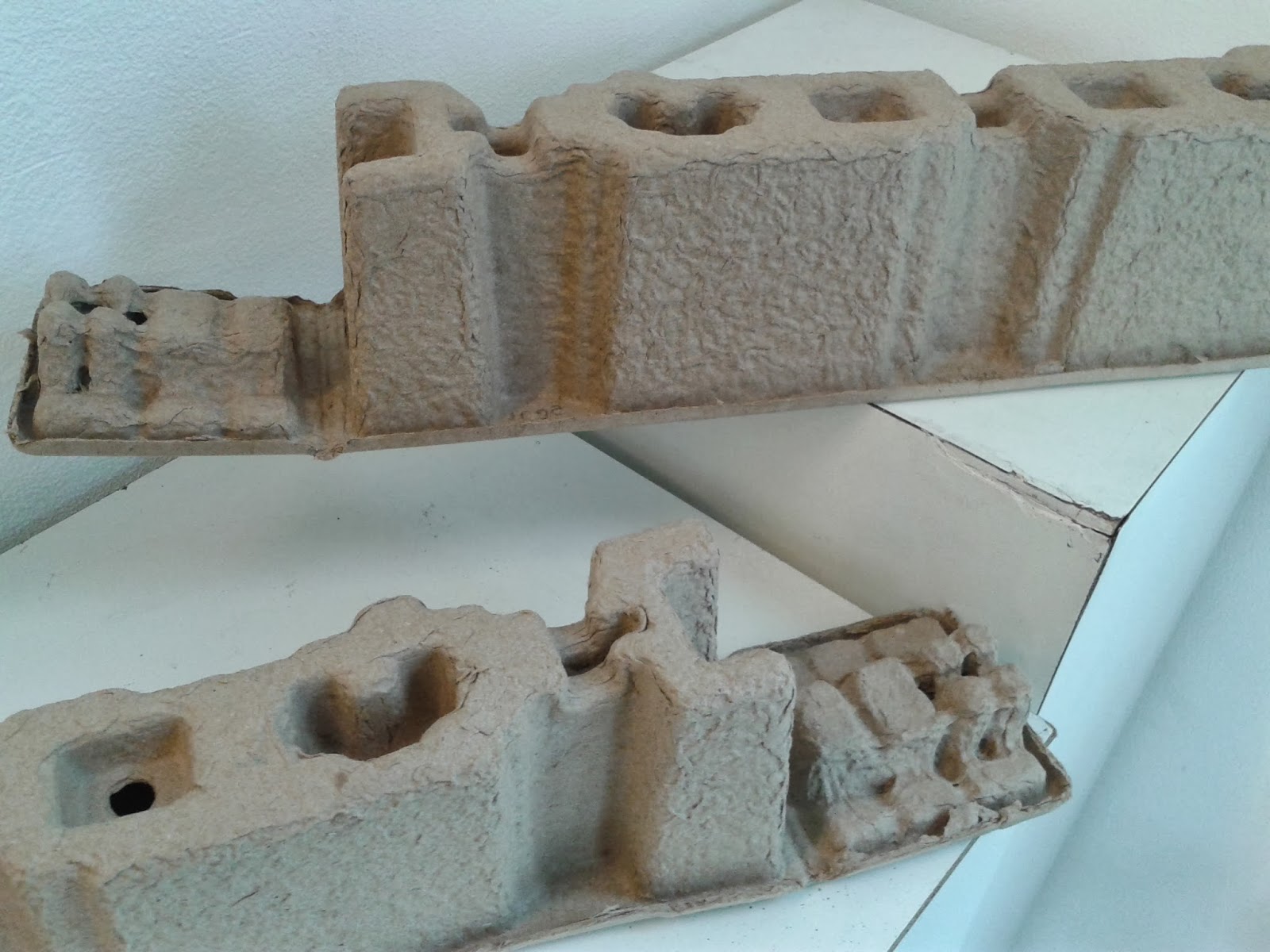 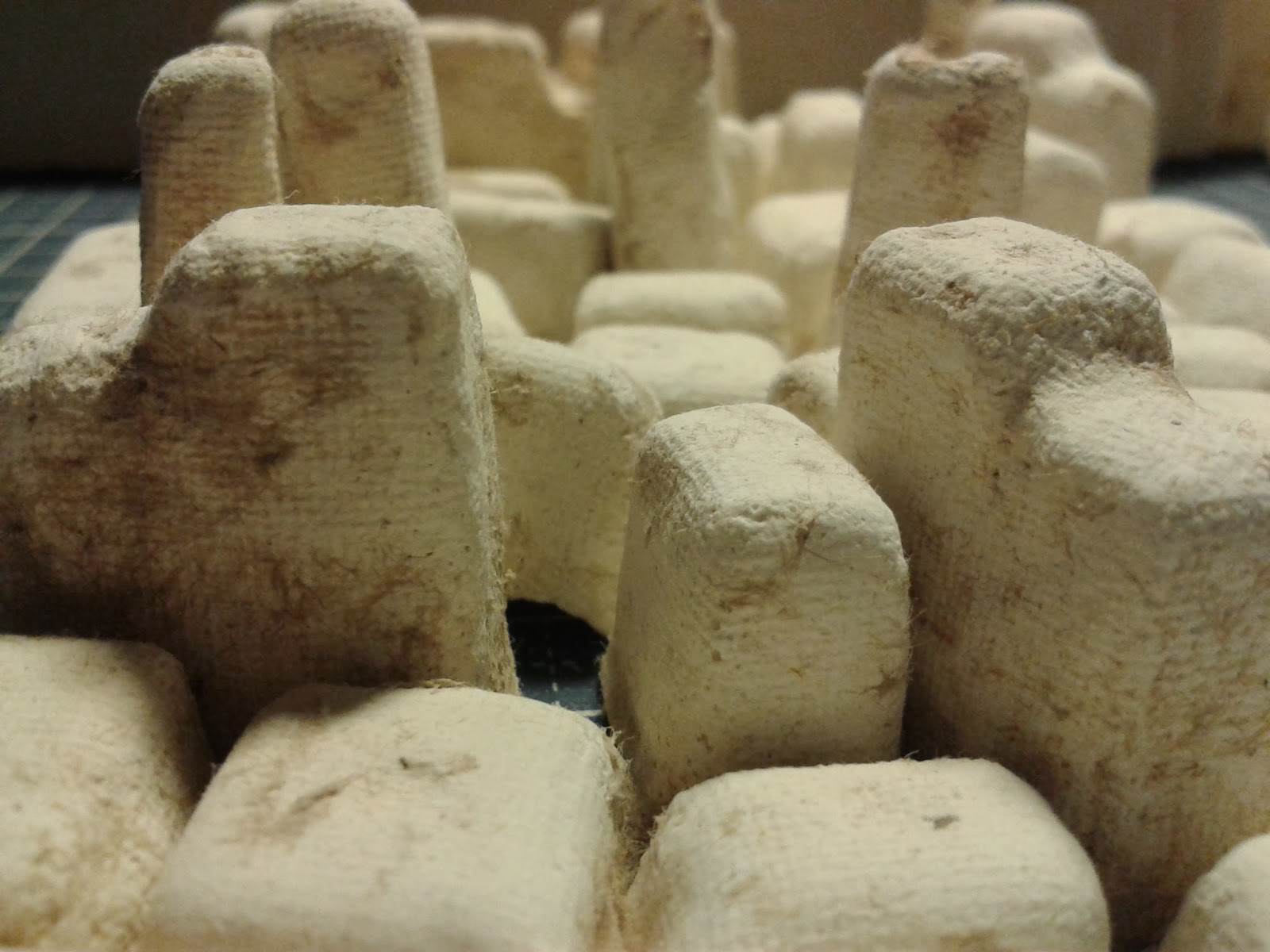 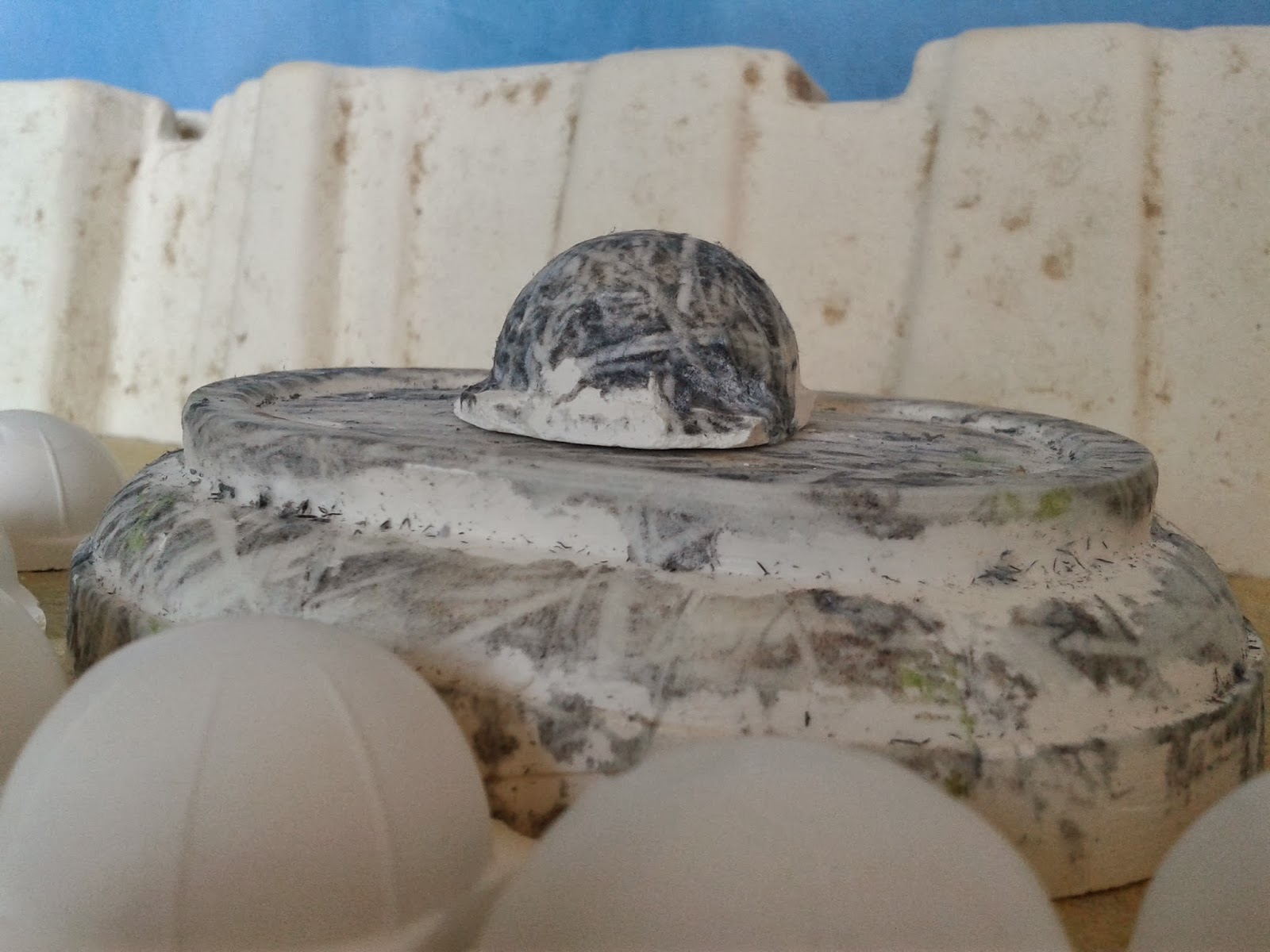 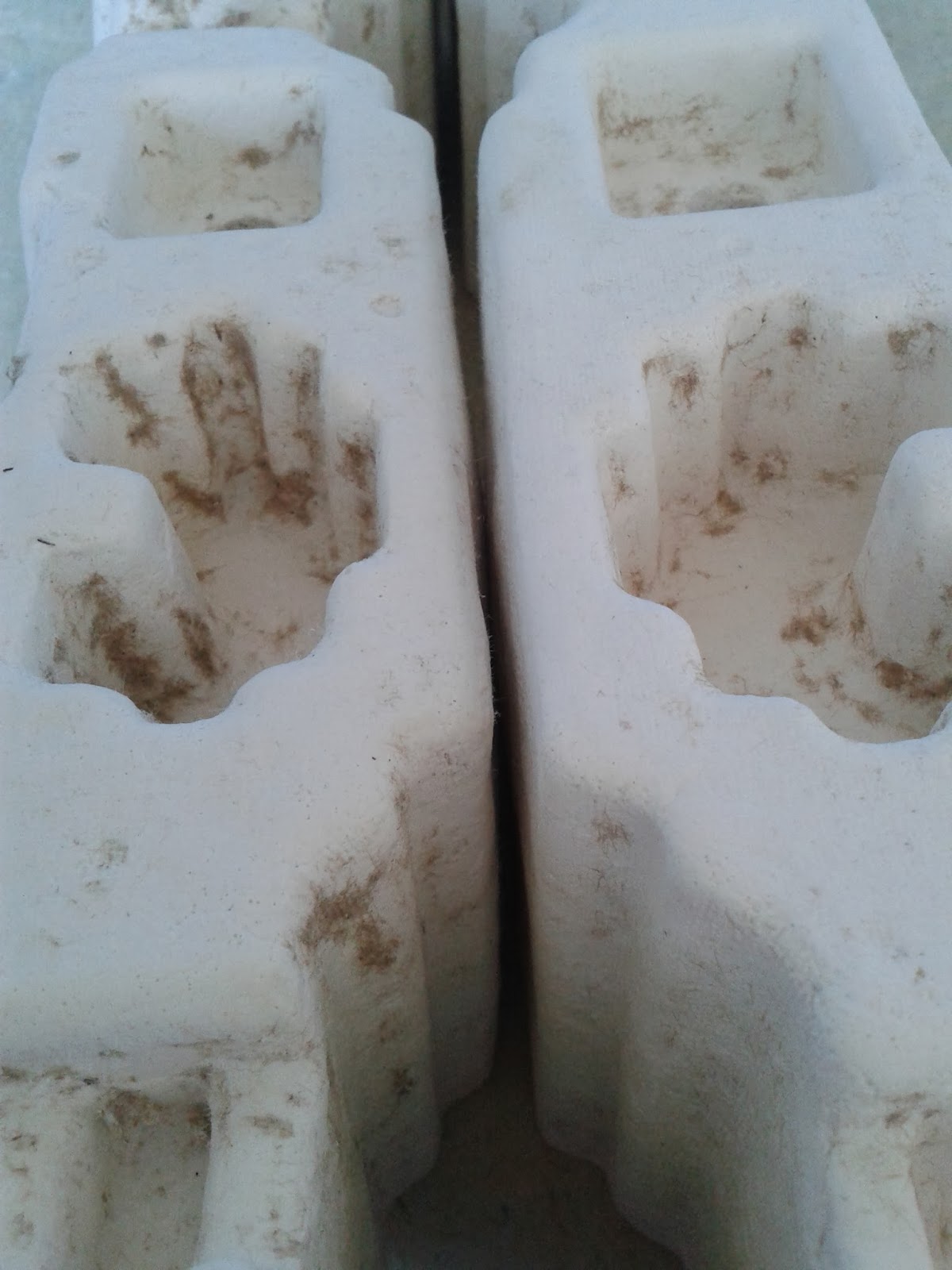 The assignment was: make a building inspired by the slums of for example Mexico or India. At first I had no idea what to do, so I started with the leftover forms used for packing a laptop in a box (top photo). I filled them with plaster and also filled some cookie and chocolate moulds.
Great forms appeared, for example the dents in the chocolate moulds.
I tried to transfer a photo of sticks on one of the moulds, that's why its darker.
In the end I couldn't make it work for this project, so I abandoned the plaster forms and set to work with slides.